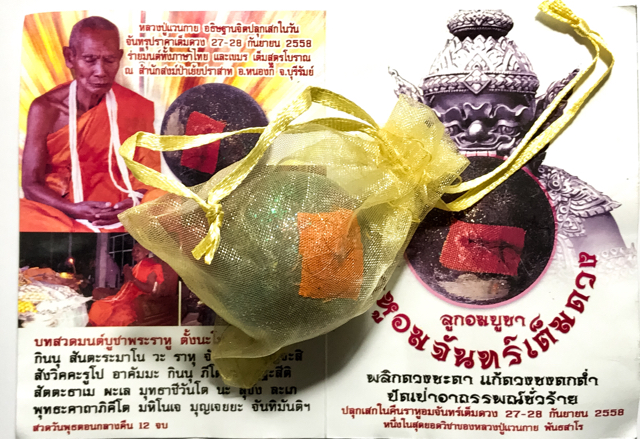 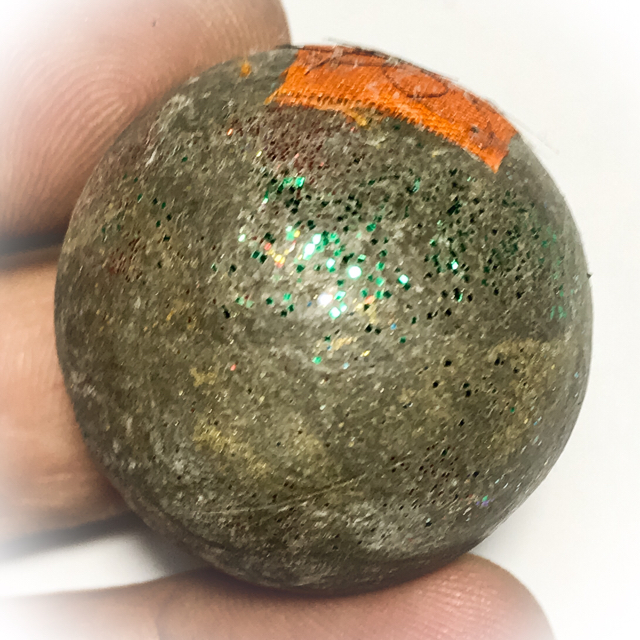 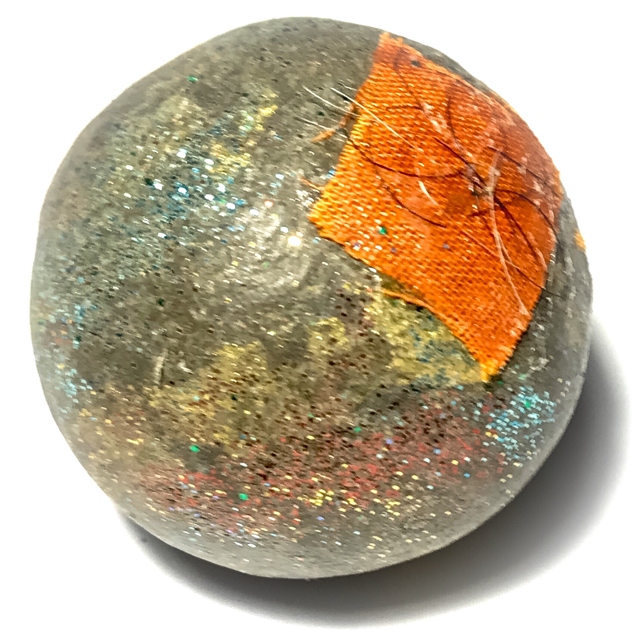 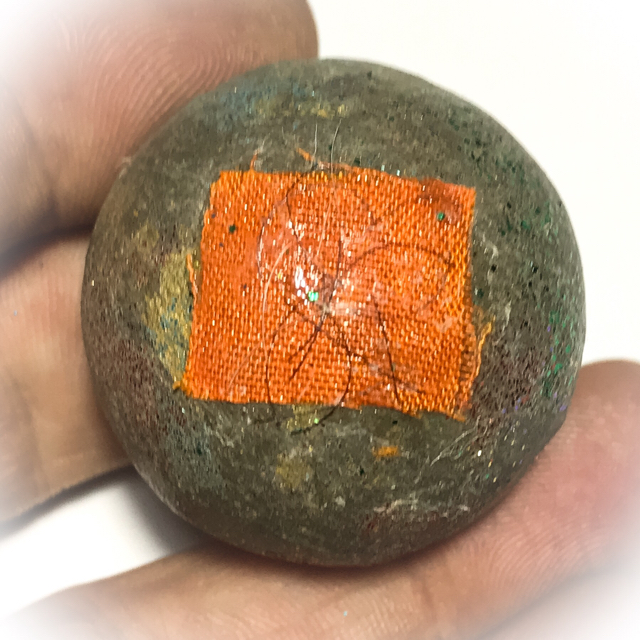 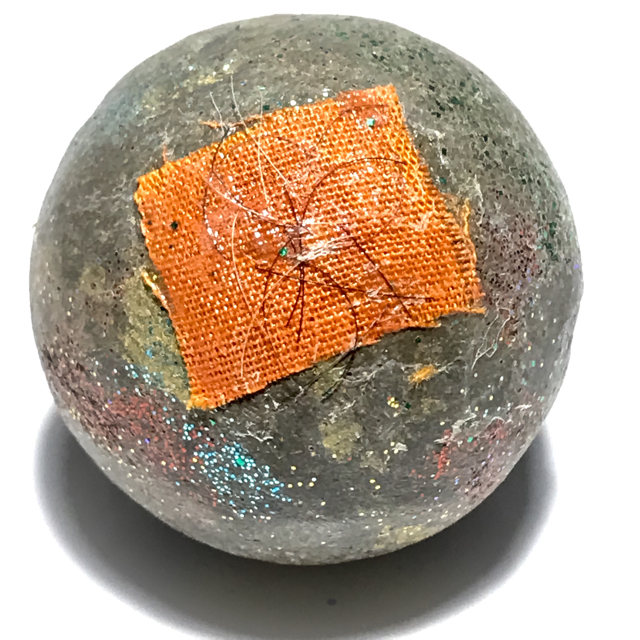 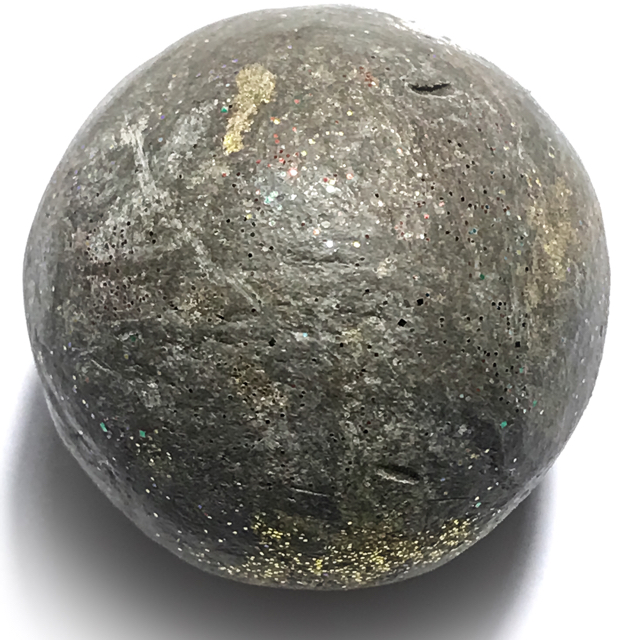 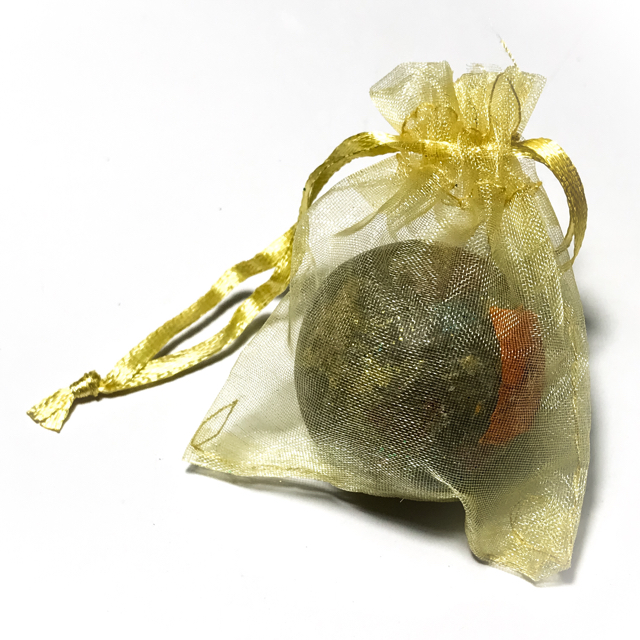 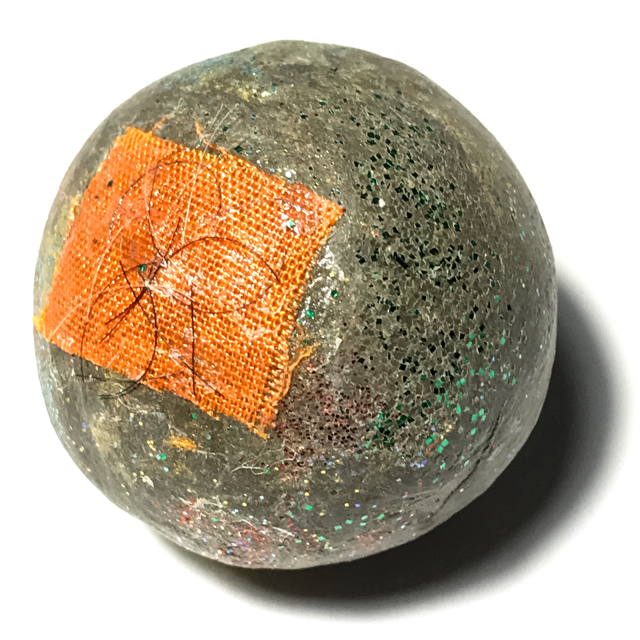 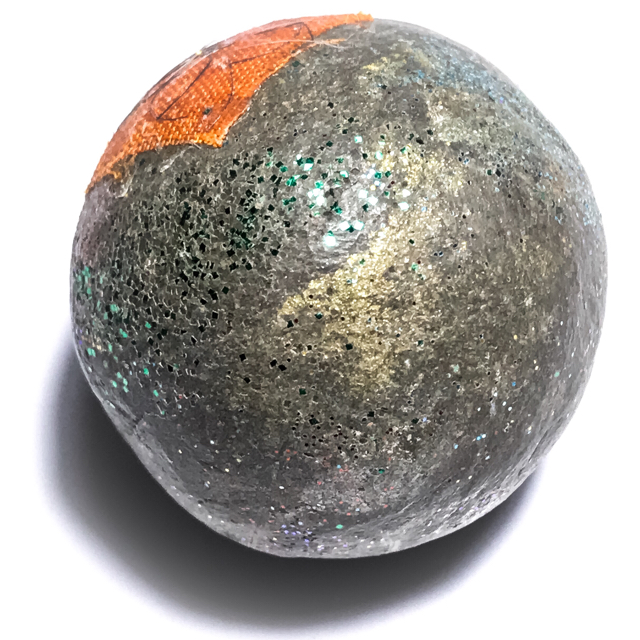 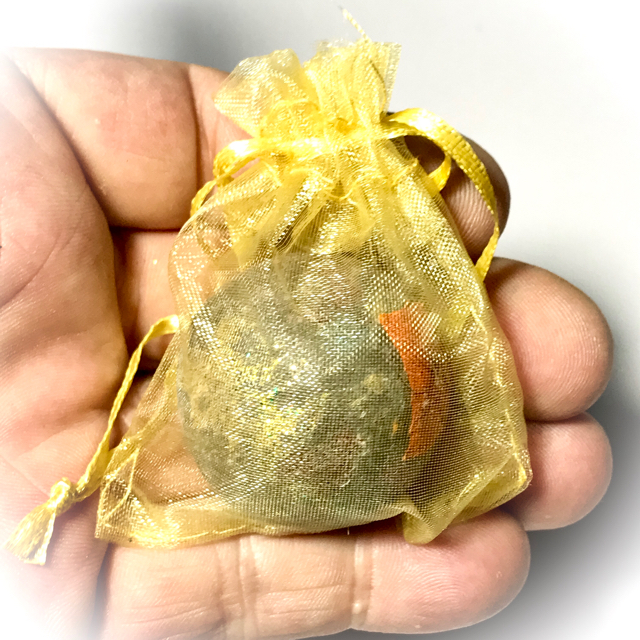 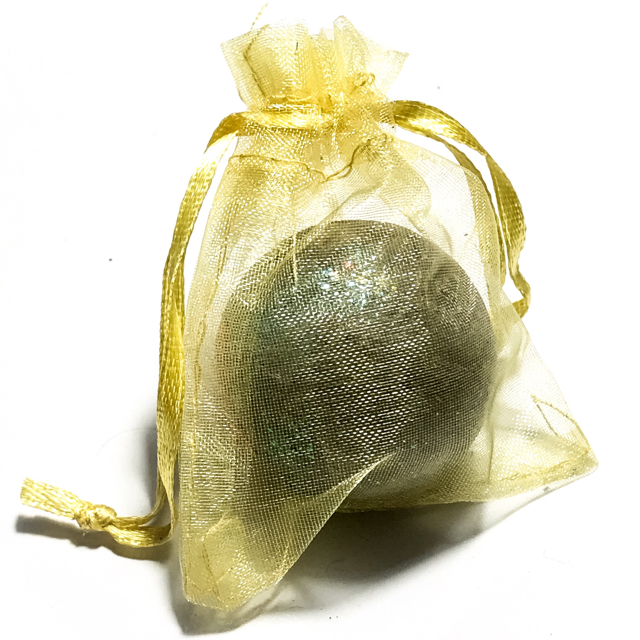 The Sacred Powder Look Om is composed of a vast number of ingredients, mostly secret, deriving from herbal, mineral, Kaya Siddhi and other Magical Substances, mixed with Prai Oils, and with a Piece of Luang Phu’s Civara Rbe attached to seal with final blessing from this Great Agéd Master Monk of the Khmer Sorcery Tradition.

The Wishing Ball was made in two versions, some in smaller size  ‘Look Om Niramit Tewada Long Din is made using both Khmer and Thai Sorcery Empowerments, with Luang Phu Waen Gaay using a large collection of 108 Sacred Powders and Puttakun Powders collected from the Khmer Mountainous Region of Khao Gilen, and from Sacred Places in both Kampuchea and Thailand. Khao Gilen was a very sacred Place for the Ancient Khmer People, and is a place of Great Magical Power. 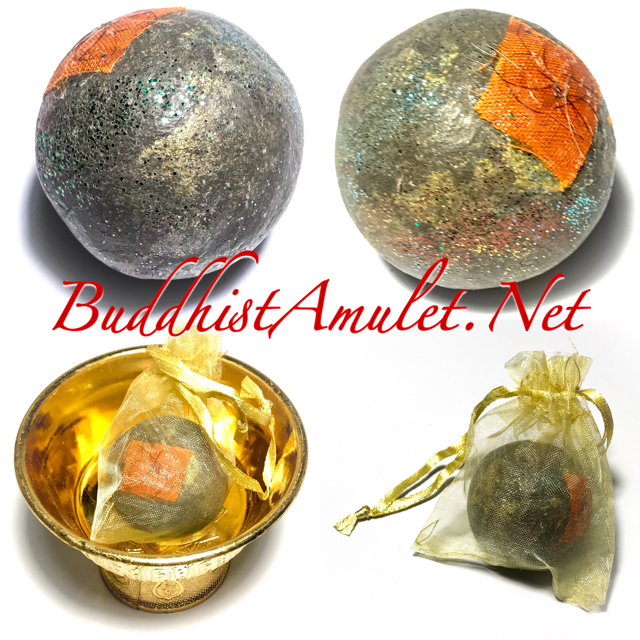 Luang Phu Waen Gaay Pantasaro empowered the Muan Sarn Ingredients, by grinding them up in his Mortar with the Sacred Pestle, and performed Incantations and Jhanic Empowerments non stop over the whole day and night without rest, until they were completely filled with power. He sent his mind up to the Celestial realms and Invited the Angelic Beings to come down to earth to witness the empowerment and add their blessings and empowerment to the amulets. The edition was given the name ‘Niramit Taewada Long Din’, which means ‘To see a Vision of the Angels descending to Earth’, and this represents what happened on the Astral and Spiritual Planes during the Ceremony of Empowerment.

The Look Om should be worshiped by chanting the fiollowing Kata given by Luang Phu Waen Gaay, Make Offerings and Chant it 12 Times in Bucha 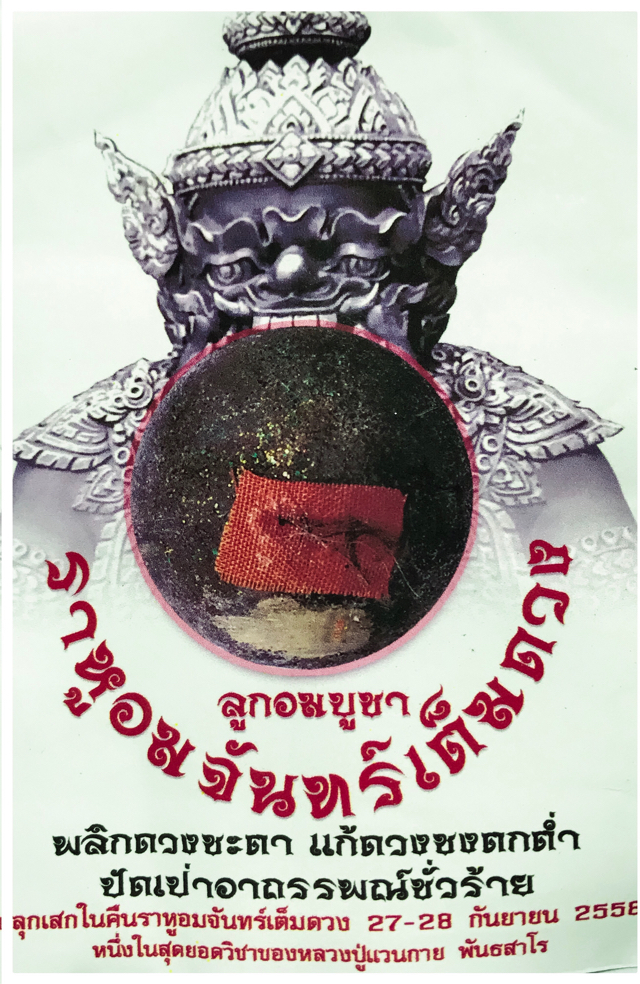 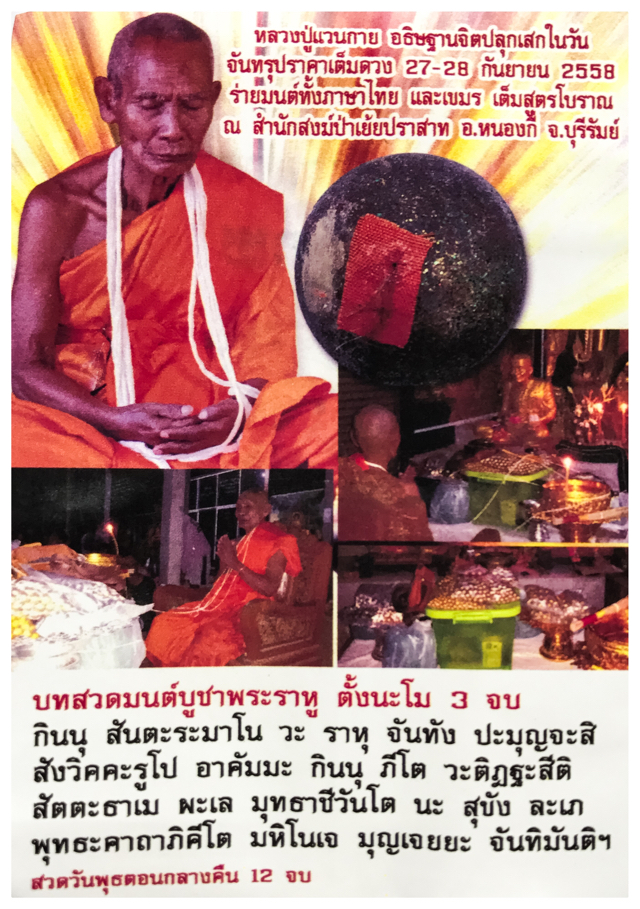 Luang Phu Waen Gaay is an aged Monk from Kampuchea who has spent many years on Tudong Forest wandering through the regions bordering between Kampuchea and Thailand, and has amassed a large compendium of ancient Wicha of both Thai and Khmer Sorcery Traditions, from both Ordained and Lay Sorcerors. He possesses Enviable Adepthood in the Khmer Necromantic Sorcery Wicha. His powers and Magical Prowess is highly regarded by his peers in Thailand for his roots in Khmer Sorcery Lineage Wicha. Few Guru Masters possess direct Initiation in Kampuchea, into the Dark and White Arts of Ancient Khmer Sorcery, and this has made Luang Phu Waen Gaay’s Talismanic Amulets extremely sought after. Luang Phu Waen Gaay empowered the Look Om on 28th September 2558 BE during a Lunar Eclipse. He performed the Incantations using both Khmer, and Thai Sorcery Empowerments, at the small forest temple of Samnak Songk Pha Yeuy Prasat in Nong Gee, Buriram, Thailand. Bucha Method; You can keep the Look Om in a Pan Kroo or any suitable receptavle on the altar slightly lower than any Buddha Images, and pray to it as an Altar Worship item.