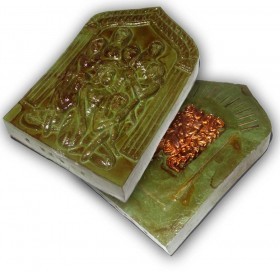 Pong wan khun phaen powder has a lot of puttakun power as well as other magical effects such as metta (‘loving kindness’), choke lap (‘lucky and fortune’) and kaa khaay (‘success in commerce, business and speech’). Hence, the pong wan khun phaen powder used in this Khun Phaen Jet Nang Rum Rak amulet by Kroo Ba Chay Chana will bestow abundant metta upon the wearer, so that he or she can travel safely, and thus may find that the people he or she meets along the way are very helpful indeed and full of metta towards the wearer of this amulet. Another quality of the pong wan khun phaen powder is that it can encourage important people, like high officials, to have admiration and compassion towards the person wearing the amulet.

The pong wan putsa herbal powder also has strong puttakun features, yet the magical effects of this type of powder are more related to metta mahasanaeh. This implies that the pong wan putsa powder contains a powerful enchantment spell that can make people miss you so much that it seems as if they are unable to stop thinking about you, and can’t get you out of their mind. Then there is the third sacred powder, pong salika ling tong (‘golden tongue bird’), which again has a lot of puttakun power in the sense that even the most angry persons can no longer be angry with you, no matter how hard they try. These remarkable metta aspects of compassion and mercy are especially useful for solving a legal dispute such as a court case.

The fourth powder, pong nang ok dtaek, is more mahasanaeh influenced. The magical effects of this type of powder works like a love spell, so that someone from far away may feel restless, because they have a strong desire to be you. The mere separation between you and them can make that person feel like he or she is dying broken hearted if they cannot be with you. Pong mer wan dton dtamlueang (Lat.: Coccinia grandis) is the fifth powder; it is a tropical vine with great medicinal value. It belongs to a group of natural herbs that have healing powers, also called ‘prai serm duang’. The dtamlueang herb has the effect of getting people hooked on the wearer of the amulet, and bind the two people together. This form of fascination will make them only interested in you, and no one else.

The sixth sacred powder used in this amulet is pong mai gai gug, (‘cockerel wood powder’). This type of powder represents the magical effects of pokasap and mahasanaeh. For the eight powder pong mai wua laem kork was used. This is a sacred wood powder from a tree called wua laem kork, which can be translated as ‘a bull who lost his way from his stable’. Similarly, the magical effects of this kind of powder will make people forget their own ‘stable’, too; i.e. they get lost and may find themselves sleeping in another person’s bedroom. Thus we can see the potential hypnotic effects of pong mai wua laem kork that serve as a powerful enchantment spell indeed.

The ninth and final sacred powder is called pong wan kruea taow long. This herbal powder is obtained from a very rare creeper vine found deep in the forests in mountainous regions. Since ancient times the pong wan kruea taow long is believed to possess great magical power. It has the effect of making people lose their way completely in you. Likewise, when any animal in the forest approaches you, they become trapped and can no longer escape. This type of sacred powder is therefore considered to be one of the most powerful sources of metta mahasanaeh.

Next, an auspicious date was calculated based on an occasion that is in good astrological alignment with metta mahasanaeh influences. On this particularly favourable occasion they took the muan sarn of all nine sacred powders and mixed them into one. This is called ‘pong paya tae kroo gao aathan’ (9 aathan, meaning ‘nine sorcery powders’). The pong paya tae kroo gao aathan were then consecrated for seven nights, and pressed into the shape of the khun phaen amulet. The rear side of the amulet features the image of the in koo mahasanaeh plod rak, which is to bind the two hearts of a couple deeply, or to reinforce the love between them. This is due to the wicha ‘pit sawat’ which causes both lovers to become inextricably entwined.

After the making process of the khun phaen amulets was finished they were empowered in a abhiseka consecration ritual through chanting the ‘Montr Kata Maha Leloi Pra Khun Phaen‘ mantra. Then series of different incantations followed which are known to increase business and commerce, and also choke lap (‘lucky fortunes’).  Next, there followed meditative empowerments for a long time until all the amulets received sufficient power. And as a final empowerment, the amulets were soaked in nam man montra paya tae kroo oil to charge up the puttakun powers (especially the metta mahasanaeh and metta mahaniyom effects). The special ongk kroo version comes in a giant size of 10 cm x 6.5 cm x 1.3 cm, and features 16 takrut and an in koo mahasanaeh plod rak amulet on the rear side of the amulet. Also, there is the code on the base. Furthermore, this extraordinary ongk kroo version has a beautiful natural green color that comes from the rare dtamluang powder.