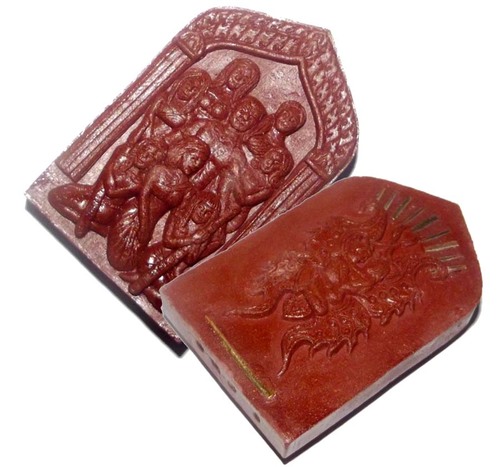 The ‘Pim Yai 10 Takrut’ version comes in a size of 6 cm x 3.7 cm x 0.7 cm, and features ten takrut, and an in koo mahasanaeh plod rak image on the rear side of the amulet, which is to bind the two hearts of a couple deeply, or to reinforce the love between them. This is due to the wicha ‘pit sawat’ which causes both lovers to become inextricably entwined. And lastly, there is also the code on the base of the amulet. The in koo pisamorn, sometimes also called taep pmohr bachadta, has a strong mahasanaeh powers with aphrodesiac effects. The mahasanaeh aspects also bring the wearer of this amulet a lot of attraction, which often lead to flirtations, or may even result in ‘kama sutra‘ adventures. Although finding a partner is the main purpose of this amulet, but in case one already has a partner, then it will help to increase their relationship. Besides the mahasanaeh effects, mercy (mahaniyom) is also obviously present within this amulet. These particular magical powers are very good for commerce, for making sales will become easier. This is due to the fact that one’s speech with charm, which is especially good for doing business. Thus, in general one will see a fast increase in his or her prosperity. After the making process of the khun phaen amulets was finished they were empowered in a abhiseka consecration ritual through chanting the ‘Montr Kata Maha Leloi Pra Khun Phaen‘ mantra. Then series of different incantations followed which are known to increase business and commerce, and also choke lap (lucky fortunes). Next, there followed meditative empowerments for a long time until all the amulets received sufficient power. And as a final empowerment, the amulets were soaked in nam man montra paya tae kroo oil to charge up the puttakun powers (especially the metta mahasanaeh and metta mahaniyom effects).