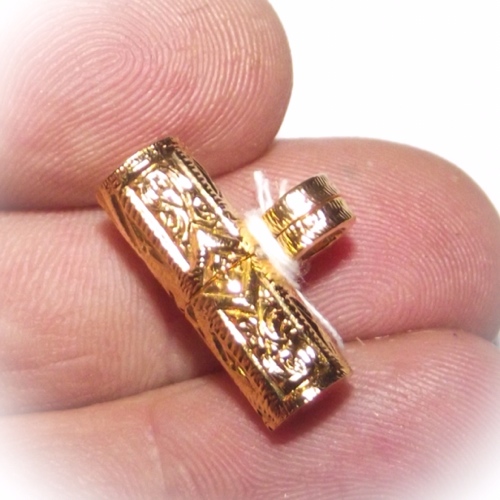 Takrut Narai Plaeng Roop (Transformation of Vishnu – 101st Anniversary edition Luang Phu Tuad lineage amulets, blessed by many great masters. The Takrut is contained within the classic design made famous by the originator of the wicha, Pra Ajarn Nong. The gold plated casing is engraved with patterned exterior, and has sinjana cord attached to the pendant hoop.

The always eagerly awaited Wicha are always those that are less often issued due to the extreme difficulty and complexity of the Wicha, both the Takrut Narai Plaeng Roop and the Takrut Jakkapat are two of the most sought after Wicha in Takrut amulet making, and also almost certainly the two rarest Wicha to find an Adept Master whose powers are capable, and who possesses the Wicha to successfully empower them. The Takrut Tone Narai Plaeng Roop, is the most famous of all Takrut, and originates from the great master, Ajarn Nong, which was so successful with Devotees, that it has become his trademark. If we talk of Ajarn Nongs amulets, then the Takrut Tone amulet is one type which cannot be overlooked, for his Takrut charms are amongst the most preferred amulets of LP Nong along with LP Tuad amulets. It is therefore the Takrut and the LP Tuad amulets, for which Ajarn Nong, and his lineage is commonly known for. Especially in the Vietnam War, the Soldiers who had received Takrut from Ajarn Nong all came home safely without one single exception, and many returned with tales of miraculous escapes from death, attributed to the magic of Ajarn Nongs Takrut amulets. There are so many tales of Devotees encountering Miracles and life saving magic, that the legend of his Takrut follow him like his own shadow. It is said that Ajarn Nong began to make and hand out Takrut Tone amulets around 2496 BE, which he would hand out to his close disciples. The very first Takrut were made from small sheet of Iron, and were small in size.

Some time later, some Looksit brought some gun shells to use for Takrut making. These Takrut were varied sizes depending on what kind of bullet shells were available. This edition gained much fame and legendary status for the many life saving tales from those who possessed one.

Blessing ceremony Buddha Abhiseka was held on 14 November in the year 2556 BE, at Wat Sai Khaw in Pattani (Temple of Ajarn Nong)

These Transformation of Vishnu Takrut, are famous also for their Puttakun power to change bad luck back into good luck, and to transform fate. After he began to make bullet shell Takruts, his magic also became known for powerful ‘Maha Ud’ (Gun Stopper) and ‘Klaew Klaad’ (Evasion of Danger). Whenever the inventor or bringer of this Wicha, Luang Phu Nong of Wat Sai Khaw would hand out one of these Takrut, he would say ” this is for protection, if someone thinks to harm you, you, they will not be able to find you, and those who try to harm you, will encounter their own demise.

The Wicha Narai Plaeng Roop used for these Takrut, is an Ancient Wicha, which is mentioned in the Dtamra Saiyasart as being a Wicha which has immense power, like that of Pra Narai transforming. It contains a multitude of different blessings. The Wicha of making a Takrut with the image of Pra Narai (The god Vishnu), is a Wicha which not many people know how to perform, which makes this type of Takrut extremely rare to find.

To perform the spell properly, it is necessary to Master the ‘Wicha Dtang Akarn 32′ and the ‘Wicha Riak Roop Riak Nam’, as is usual with all spells that use the image of a being, Himapant animal or Deity.

But it is much more difficult to force and contain a magical image of Pra Narai using incantation, than it is to contain and subdue a lower Deity or Himapant animal.

This is therefore the reason why there are hardly any Masters at all who can enforce this type of magic spell alone. The usual and more common method for applying this Wicha, is to use a Yant design which represents the basic principles of Pra Narai transforming, or to use a Kata instead. The image of Pra Narai is simply too powerful for most people to be able to control and force into the Takrut.

The Biography was published to celebrate 200 years of the Ratanakosin Era. In the story it tells that, as King Rama 4 called upon Somdej Dto to accept a dignified status, Somdej Dto fled to the forest, and hid from the responsibility. He did not wish to have status, rather wished to be a simple monk.

His Majesty sent envoys out around the country to find Somdej Dto, but however hard they searched, he could not be found.

Somdej Dto used a Wicha to change his face so that those who knew him would not recognize him if the saw him, and he was only able to be found, because he presented himself to the Gamnan (Marshal) of Ban Phai, who took him then to Wat Po Chetupon. The wicha Somdej Dto used to change his appearance,is the Wicha Pra Narai Plaeng Roop.

The famous Ajarn Nong, who brought this particular Takrut Wicha to the World, would always tell his Looksit who received the Takrut Pra Narai Plaeng Roop, that they would be able to avoid dangers. The story of Somdej Dtos disappearance demonstrates the power of this Wicha, for it is much harder for a Nationally famous Monk whose portrait everyone knows to hide than a normal person, proving how the Wicha Narai Plaeng Roop can make even a well known face able to avoid being noticed. Legend tells that LP Nong received his special form of the Wicha Pra Narai Plaeng Roop one evening, as a tree spirit, who appeared to him, dressed as in ancient times in a red ‘Pha Sabai’ robe. She appeared in front of the pillars of the Kuti hut of Ajarn Nong, and showed him the Wicha for making Takrut Tone, how to make the Agkhara inscriptions and Kata incantations for empowering the Takrut with the Pra Narai Plaeng Roop spell. She then told him her name, which was ‘Mae Nang Jantr’.

He was told by the Mae Nang Jantr that she is a Deva who lives on the peak of Mount Kalakiree, and is related to Luang Por Sitti Chai, the ex Abbot of Wat Sai Khaw. He said that the Mae Nang Jantr Deva wanted to collaborate and join in to make Merit, by helping Ajarn Nong complete the building of his Kuti, and also to enable Ajarn Nong to become Abbot of Wat Sai Khaw. So she showed him how to master the Wicha Takrut When Ajarn Nong awoke from the Nimitta, he felt as if he had been speaking with a real person, and could remember every detail of the dream perfectly.

Ajarn Nong Thus believed everything that had occurred during his Nimitta Vision, including the fact that this Wicha for Takrut is authentic.The versions of Takrut Narai Plaeng Roop which were made with bullet shells, were usually also filled with sacred items. The main sacred item Ajarn Nong would insert into the Takrut, is a kind of wood called ‘Mai Luang Por Thuad’, which the Deva Mae Nang Jantr told Ajarn Nong how to find, and take from Mount Kalakiree.

No one except the inheritors of his lineage Wicha really knows what kind of wood it is, nor what it looks like, because Ajarn Nong would lay out a rule that it is forbidden to break the seal of a bullet Takrut and open it. If such a thing were to happen, the Takrut would be immediately ineffective and never again usable. Funds from this edition go to assist in the reparations, restoration, and further development of Wat Ampawanaram, in Pattani.