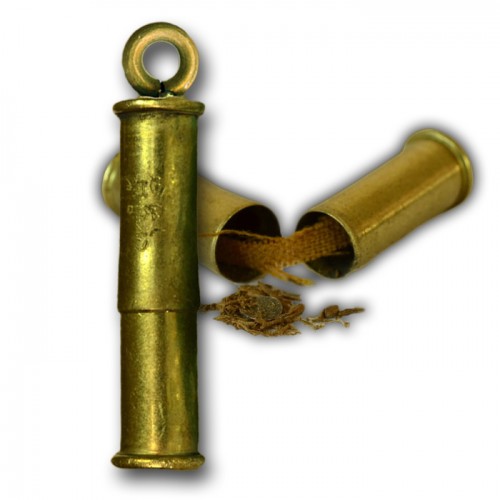 The purpose of this edition was to raise funds for the restoration of the installations within the temple of Wat Rasdorn Sata Dhamma (Wat Bang Khan).

This was a Legendary saying attributed to the wicha of Pra Ajarn Nong of Wat Sai Khaw, who is the forefather of all bullet takrut wicha, and the master guru of wicha Takrut Look Pern. He is one of the top three masters for the Luang Por Tuad amulet of Wat Chang Hai. His amulets are in demand only second to Ajarn Tim (Wat Chang Hai) himself.

Why do we speak of this? Simply because this takrut is made by the direct lineage looksit of Pra Ajarn Nong using the directly transmitted wicha according to the correct formula of muan sarn Iingredients of the wicha Look Pern. It possesses the power of kong grapan chadtri, klaew klaad and maha ud, along with maha amnaj baramee for status and commanding power over one’s minions. 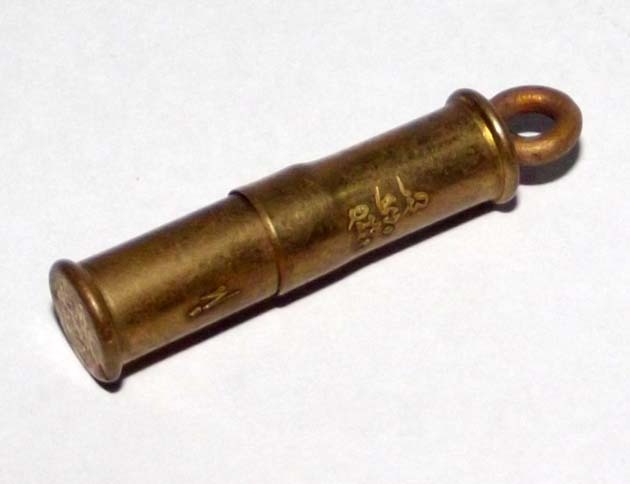 The takrut has the Agkhara ‘Putta Dtang’ embossed on it.

The bottom of the takrut has hand spell inscription of maha ud and the letter ‘Foo’ on the side for Luang Por Foo. 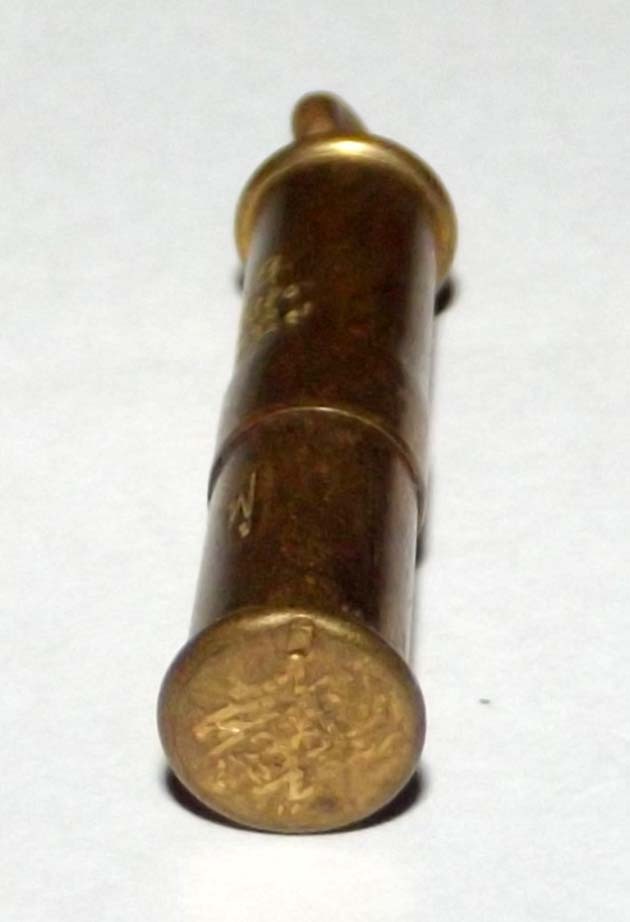 In the olden days when sacred protective amulets were made, the chanuan muan sarn (metals and substances used for the making of amulets) were taken from different forms of weaponry, be it swords, daggers, knives, ‘sastrawut’ (manufactured weapons), or natural ones such as elephant tusks, boars tusks and tiger teeth and claws. Sometimes even the whole weapons themselves were used (such as mitmor and dab Akom).

There is, we believe, no one in the present day who will not deny that the ‘pern’ (gun) and the bullet, is the most deadly of all weapons that humans invented. It is able to kill without any effort, just by pulling the trigger. If the gun lies in the hands of an honest and ethical person, it can be a blessing that protects your belongings, home and family as well as your own life. But when it falls into the hands of an evil person who has the intention to murder and commit atrocities, then the gun becomes something deadly, from which one needs a strong defense. 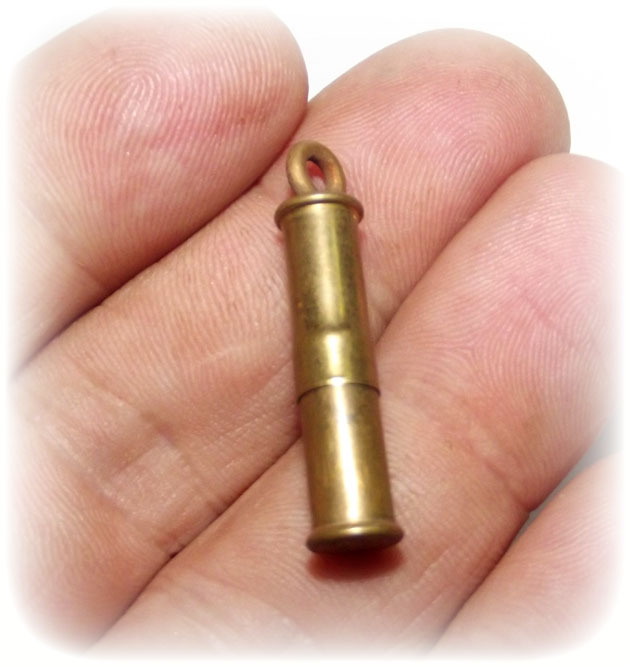 The Takrut Look Pern is a wicha to protect against bullets and other weapons that come in the hands of the evil, as well as protecting from accidents and deadly events. The Takrut Look Pern relies on the power of the formula of muan sarn ingredients within the bullet shell. Only bullet shells that have already been fired were used for the takrut, and they had to be bullets which, when fired, produced a very loud sound. This inflects the magic of maha amnaj (commanding power to listen and obey).

The takrut scrolls within the bullet shells were made from nine kinds of sacred artifact metals, which were smelted together, and then cooled and pressed out into a thin plate for cuttting and inscription of Khom Agkhara (Khmer-Thai Pali lettering used specifically for the inscription of sacred yantra and magical spells).

The yantra foils received the inscription of the ‘Maha Ud Gunstopper’ spell from the great Luang Por Foo Adtipatto. Sacred pong Puttakun powder was used from a grand assembly of different collections. These powders have passed through a large number of different important empowerment and Putta Pisek ceremonies throughout the years. 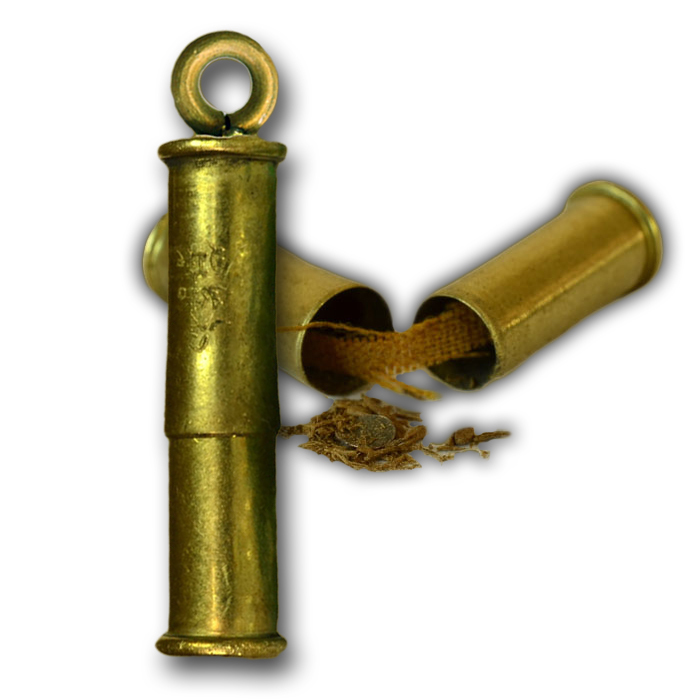 The civara of Luang Por himself was cut into pieces and inserted along with the powders for klaew klaad evasion of deadly events. The various elemental and kayasiddhi substances were placed inside for pokasap, maha amnaj, choke lap and auspicious prosperous blessings. Then the takrut contents were sealed within the two bullet shells. 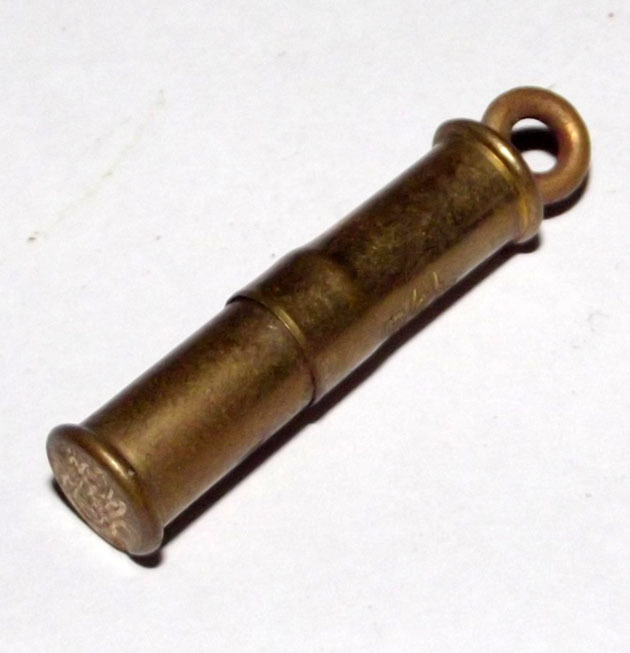 Incantations were performed as the takrut were sealed one by one with the kata Maha Ud to close and seal all gun barrels. The chosen astrological date for the empowerment was that of the Bhumipa Loka Rerk. Next, the kata Nirandtarai against all dangers was performed just as the alignments came into force. The takrut has a curse that repels any enemies who throw evil eye or black magic at you, and cause those who try to harm you to get it back in their faces instead.

It is a classic, powerful and rare bullet takrut for kong grapan chadtri and klaew klaad power that belongs to the Pra Ajarn Nong lineage masters, using the authentic formula of his magic, powders, and civara robe. 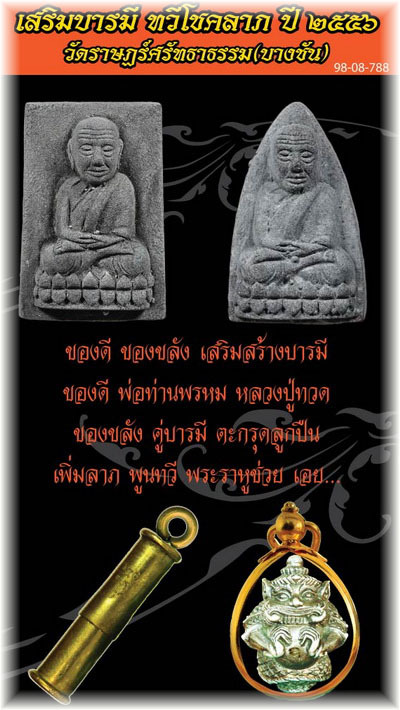 One should use the kata Aaratana Pra Krueang to pray for the protection of the takrut.

Make a wish, then chant: 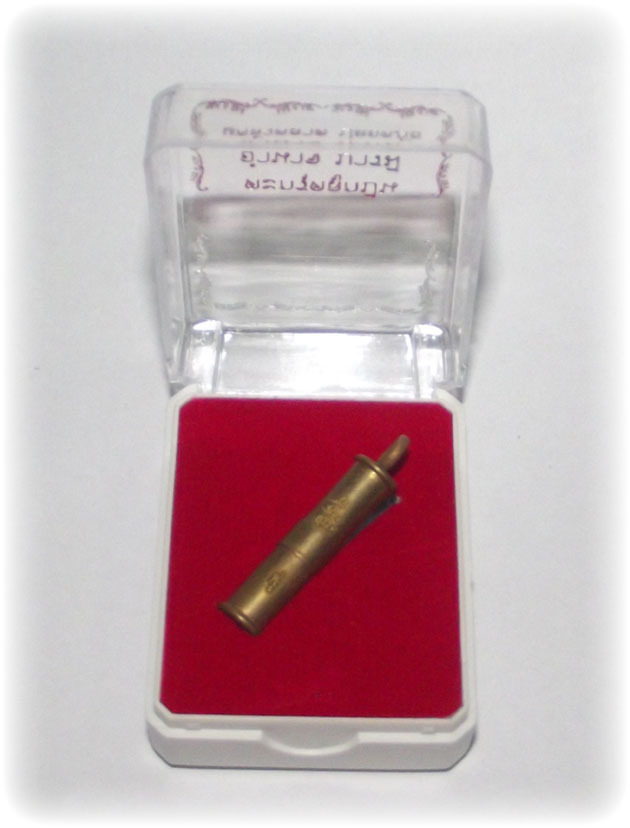 The takrut comes in original box from the temple, and has a pendant ring attached in olden days style. Hence, it does not need encasement, for it can be hung on a waist cord or other pendant attachment such as a neck chain. However, one should not wear this amulet below the waist.