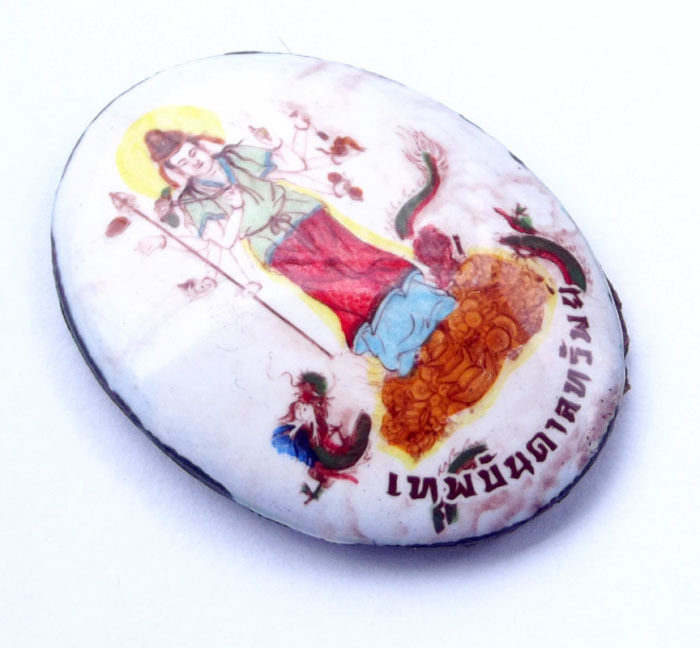 There is the image of the deva bestowing treasures on the front face of the locket, whereas the rear face of the locket is stuffed full of sacred herbal muan sarn ingredients. It is filled with a mixture of 108 kinds of magical herbs, and has some bits of hair (kesa) of Kroo Ba Kam Bpeng, as well as a piece of his civara robe. 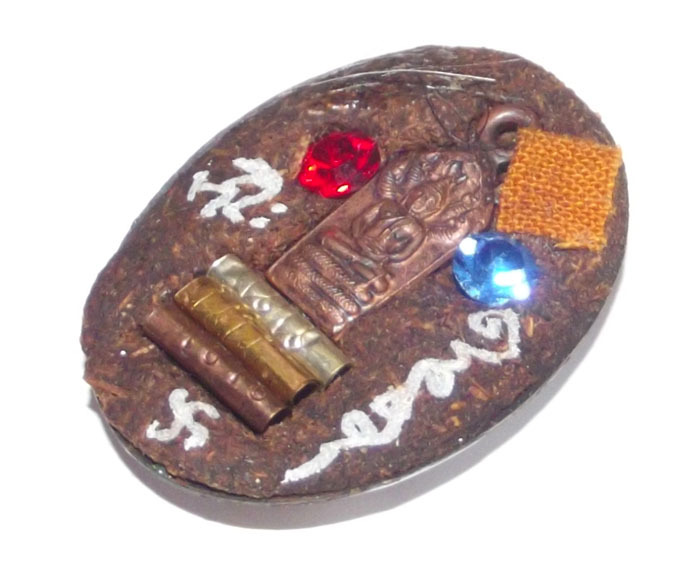 Also, there is a tiny Naga Prok amulet of the previous edition inserted in the rear face of the locket. Then, below the Naga Prok amulet there is the triple takrut Sam Kasat. This particular type of takrut originates from the Northern Lanna tradition, and is one and the same with the wicha Takrut Pitsamorn. A sacred gem is inserted on both the left as well as the right side of the Naga Prok amulet. And to make this locket yet even more powerful, Kroo Ba Kam Bpeng performed hand inscriptions in sacred Agkhara Khom lettering on the surface of the rear face of the amulet. 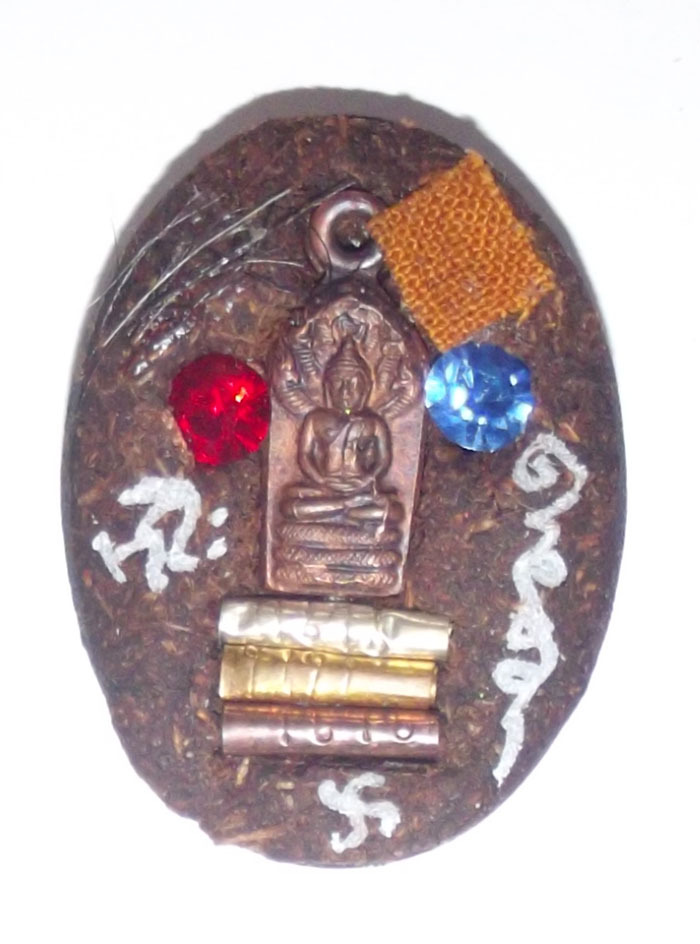 It is believed, that the Taep Bandan Sap deity possesses a manifold of magical qualities, such as choke lap, maha lap, and serm duang. This means that the Taep Bandan Sap is able to bestow lucky fortunes and treasures, to increase your prosperity, and is said to even be able to clear bad karma and negative astrological influences in your horoscope. Hence, this profound locket by Kroo Ba Kam Bpeng will help improve your standards of living, and can enhance your professional life, too. Moreover, the strong magical powers of the Taep Bandan Sap will remove any signs of bad luck, thereby clearing the way for a brighter future. 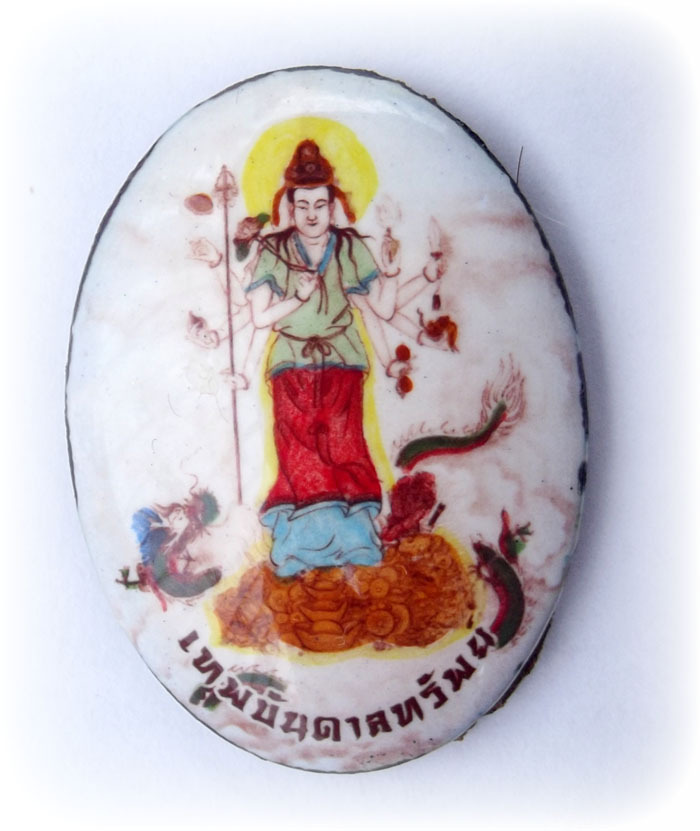 Indeed, the locket can very well be used as ‘sarapat nerk’, a wishmaking amulet. Yet it is also possible to ask for the merits of the treasure bestowing deva. For instance, one could pray for the Taep Bandan Sap to bestow upon you divine blessings and virtues by which you will acquire the ability to charm others with your speech. 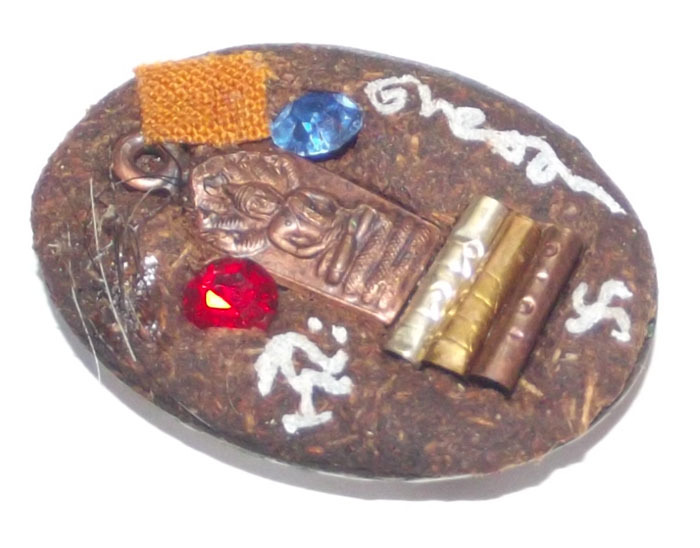 Thus, the deva of bestowing treasures will always try to maintain wholesome situations and auspicious environments around you, for this deity has a deep sense of shame and embarrassment to perform any deeds that are akusala dhamma. This means that the Taep Bandan Saep will avoid at all costs dwelling in any kind of place (both physically and mentally) which is of an unwholesome nature. 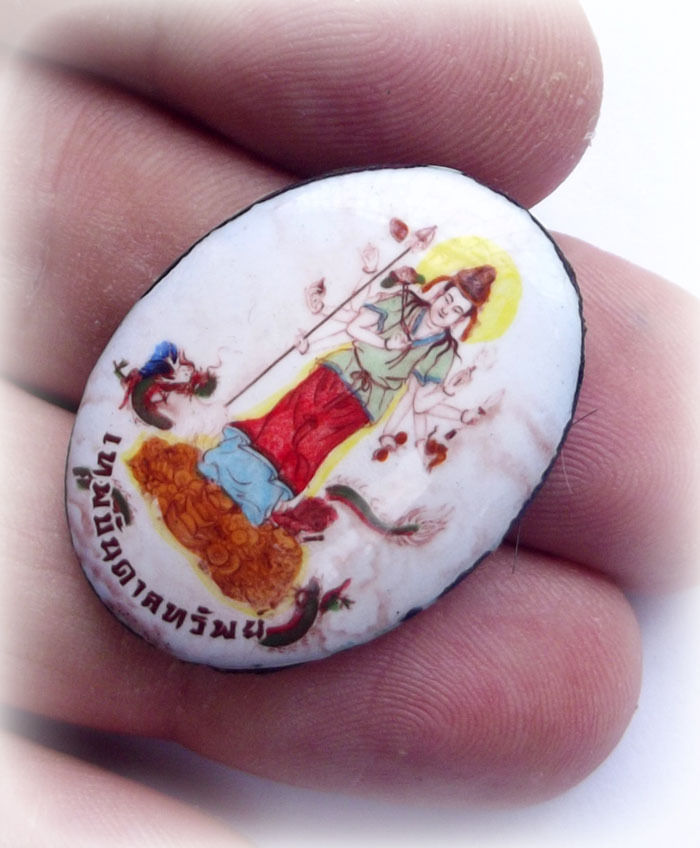