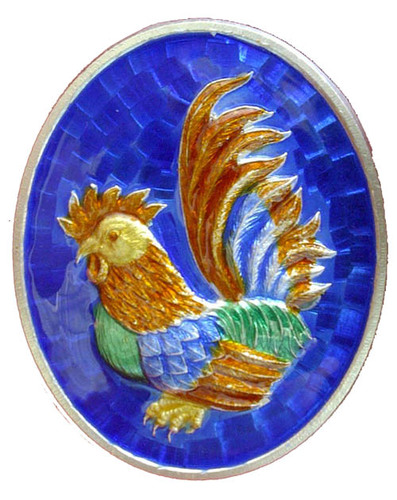 Luang Por Suang’s cockerel amulets have become not only legendary and a tradition of his amulet making wicha, it is also traditional and meritorious of Luang Por Suang, that he uses his editions of amulets to help other temples in need. In the case of this third edition, which is a fundraiser to raise funds for the building of a Sala Brian (a building for study) at Wat Tham Prohm Sawad. The building is for Buddhist monks to study the Dhamma, and the suttas of the Buddhist canon.

The making of amulets in the image of a cockerel is rare in Thai Buddha magic, but has been seen by some of Thailand’s great masters of the past to have been for those few a preferred form of sorcery. Indeed, the cockerel represents the first of the five self enlightened Buddhas of this universe’s lifespan (‘Pra Kakusanto’ or ‘Kakusanta Buddha’). 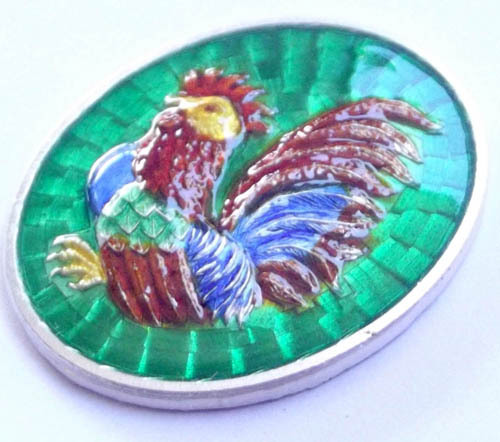 One famous master, whose amulet of a Buddha sitting on top of a cockerel, was of course the great Luang Por Parn of Wat Bang Nom Kho in Ayuttaya, and his looksit ‘Luang Por Ruesi Ling Dam’. 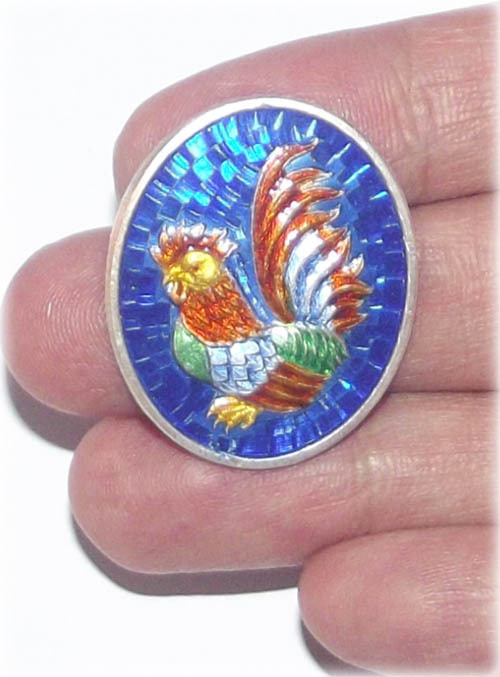 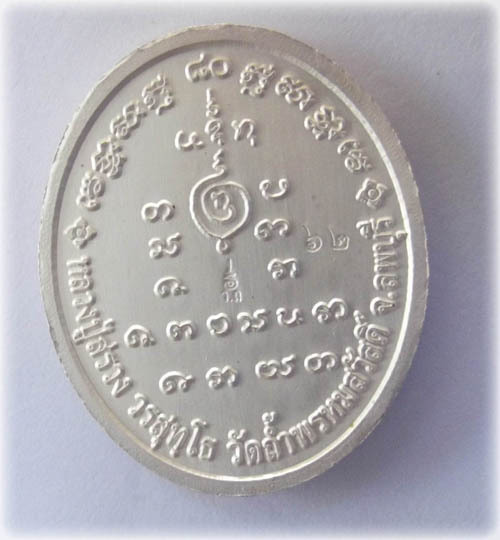 The rear face of the amulets have sacred yantra and Khom Agkhara spell inscriptions embossed, and the name of Luang Por Suang Worasutto and his temple, Wat Tham Prohm Sawad. 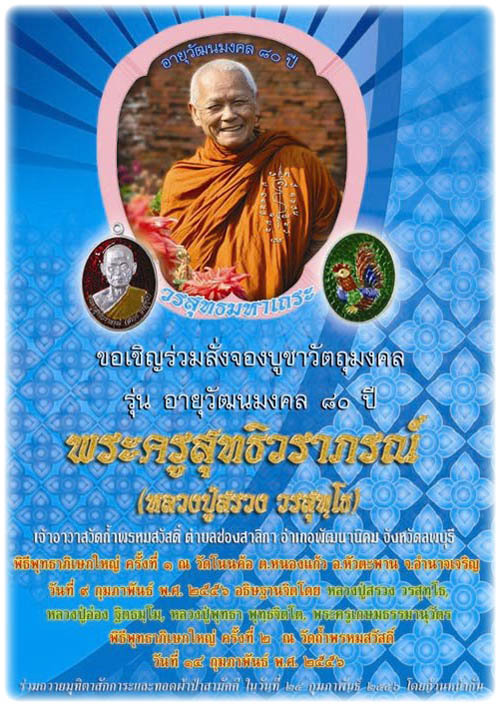 The amulets were made in ‘pim yai’ (large size) and ‘pim lek’ (small size), in two different colored enamels, namely blue and green. The coins were made in solid silver, as well as in alpaca and sacred brass with an enamelled image. The alpaca and brass versions had no back surface enamels behind the cockerel though, which is only applied to the ongk kroo models. They were also released in plain sacred metals without enamels. It is notable for students of the collectorship scene, that only the ongk kroo models of this edition have taken on fanaticism and become highly praised collector coins, whereas the other models are still relatively easy to find in circulation. 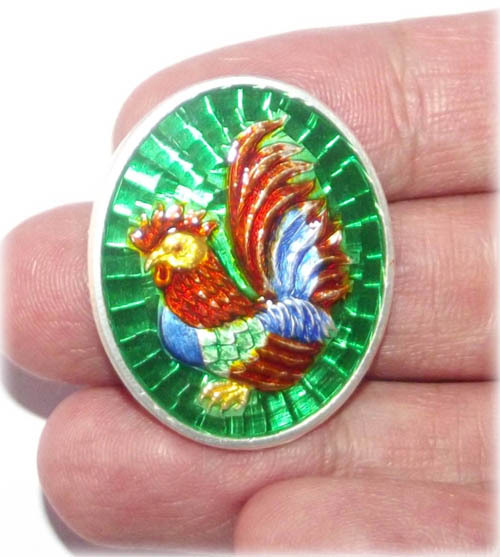 We believe, however, that sacred is sacred, and that collectorship and speculation of collector class amulets is not related to sacred value or miracle power. An ongk kroo or a standard versions would in principle, like metallic coins without sacred herbs or magical ingredients, have the same power. This rule, of course, does not apply to sacred powder amulets, oils, or necromancy, where the ingredients used are sometimes different with different price models and also have different levels of power. But in the case of sacred Buddhist coin amulets, most of the miracle power comes from faith and the purity of the monk who blesses them, more than in the metal used to make them. 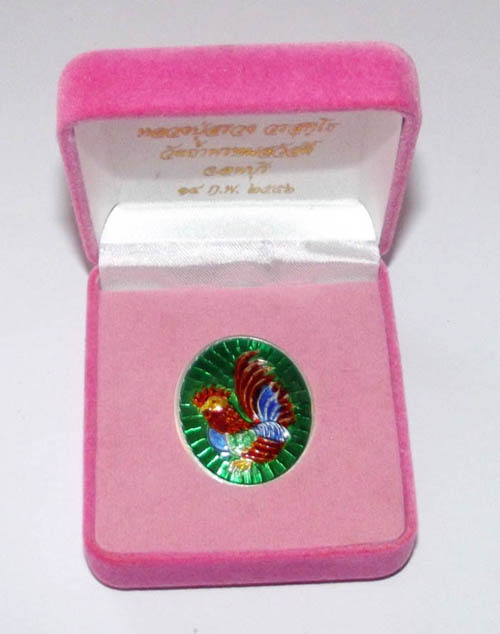 The amulet comes in original felt box from the temple. But can also be encased, if wished to be worn. 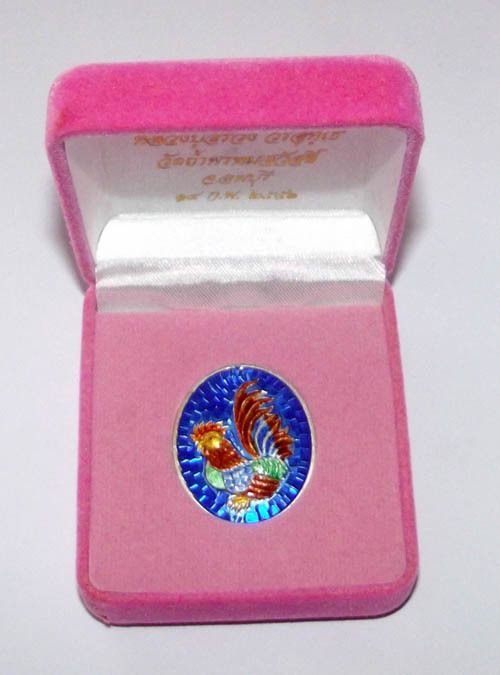 Still, the ongk kroo models are apart from sacred, also a long term worthwile investment, which will increase in both sacred, monetary and collector scene value, as well as providing the essential blessings and magical aid to the devotee. 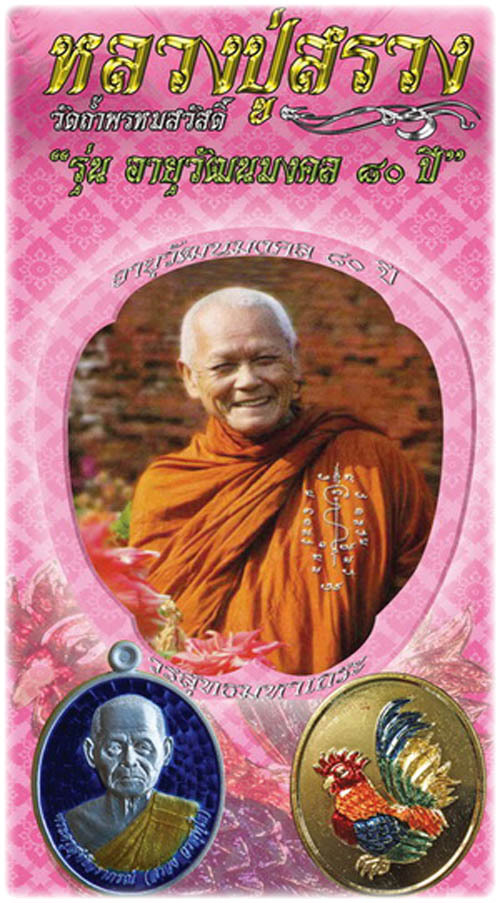 As in the past Luang Por Parn and LP Ruesi Ling Dam were the masters of celestial cockerel (‘Gai Fa’) amulets, in the present era it is Luang Por Suang who is second to none in this wicha. Luang Por Suang has inherited the wicha from some of history’s great masters, such as Luang Por Khom of Wat Phai Rong Wua, Luang Por Khaeg of Wat Huay Khao (Supann Buri Masters), and learned mastery of Kammathana (mastery of Kammathana is almost a prerequisite to psychic power) with some of the masters of the time, like Luang Phu Khaw Analayo, Luang Phu Kam Dee, Luang Por Der, Luang Phu Taes Taep Rangsri, Luang Phu Chorp, and the great Luang Phu Fan Ajaro. 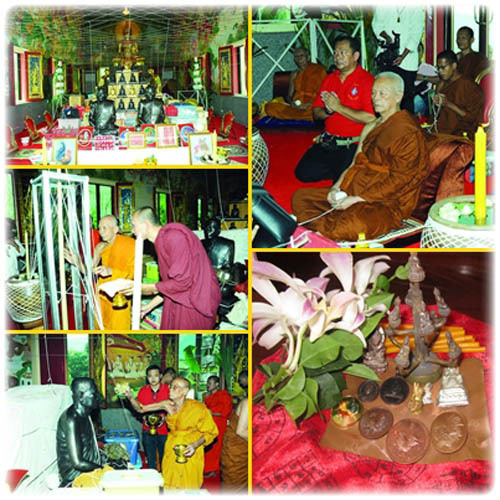 Puttapisek, or ‘Buddha Abhiseka’ empowerment and blessings ceremony was performed at Wat Tham Prohm Sawad in Lopburi on the 14th of February 2556 BE at 13.09 PM. 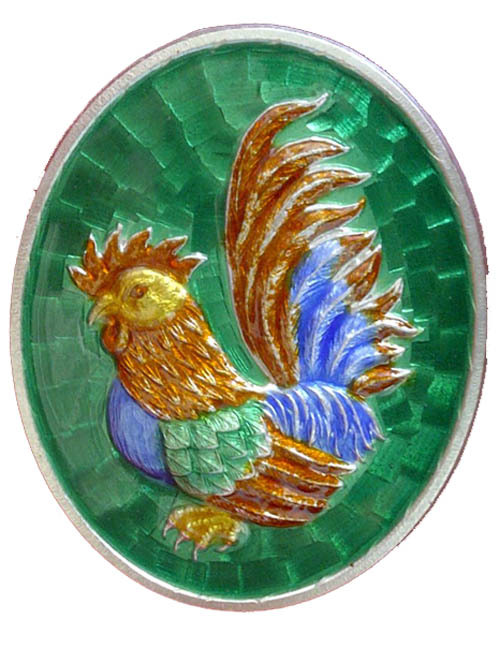