Brahma God Amulets from the temple of the Pink Uposadha

Categories: Buddhist Amulet News
Comments Off on Brahma God Amulets from the temple of the Pink Uposadha 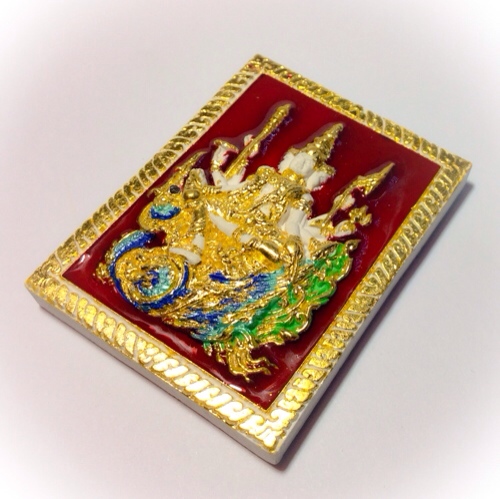 Sacred Brahma God Amulets,released in a new series, along with a range of Ganesha coins, and planetary angelic talismans, from Wat Pleng, the temple of the pink chapel (Uposada). Released in 2557 BE in the Prasitti Choke Edition.

This edition of Amulets featuring the god Brahma as the flagship of the range, has been released, to raise funds for the restoration of the pink shrine room at the temple of Wat Pleng. This is the first time that the temple releases sacred powder Amulets which have received a glazed ceramic in emerald coloured surface finish, and gold leaf painted on the surfaces of the front faces. This comes as a very special edition, for the first time in the history of this temple. The Muan Sarn Sacred Powders used in the making of these Amulets, contains a vast variety of sacred and powerful holy substances, which were mixed together to make the final sacred powder. Five kinds of holy substances were mixed with Pong Agkhara Laekh Yant (A sacred Buddha magic powder, made with the ritual inscription of Sacred geometry, and ancient Khmer Sanskrit spells, on a blackboard using chalk. The chalk, which remains as residue from the inscriptions of the sacred spells, is then used as a sacred powder). The rear face of the amulet bears a Yant Duang Sacred Geometry spell, for improving Karma, raising the line of Fate, and bringing the Fortune of a Lucky Millionaire. This sacred powder made with spell inscriptions, comes from the great Luang Por Singh, of Wat Pai Lueang. This great master in turn have made the powders using the Wicha that had been revealed and talked to him from his Kroo Ba Ajarn, The great Luang Por Ngern (Wat Don Yay Hom).
In addition, sacred powders from a house of other great world-famous historical Buddhist masters was also added to the Muan Sarn Sacred Powders. A colored enamel glaze with the herbal lacquer using sacred herbal admixture is applied to the front face of the Amulets, and a gold leaf coating is applied. Brahma sits upon his traditional steed, the sacred Hongsa.

Earth from 16 different Buddhist sacred places, including broken pieces of break and tiles from the Chedi stupa spire which has Buddha relics inside in the country of India, was added to bring sacred power to the Amulets. Powdered in senses and earth from enchanted parts of the deepest forest from many places was also gathered and added and incense powders from burned incense sticks from Buddhist shrines of over 100 different locations. Incense powders of burned incense sticks from Buddhist relic shrines around the country. Many sacred herbs with magical properties that possess Metta Mahaniyom, Maha Lap, and Maha Pokasap how are, were also mixed in, as well as other sacred words herbs and pollens, for increasing the power of Kong Grapan Chadtri.

Dried flowers which had been offered to the Buddha, by monks and great masters from a large number of different sacred shrines around the country, were also used, and from Buddha image shrines. Holy water with Buddhist blessings from sacred ceremonies gathered throughout 1500 years of ceremonially making was used to mix the powders together. The Amulets were empowered and blessed twice, the first occasion being performed 24 November the year 2556, at the temple of Wat Maha Preukataram, in Bangkok. Many great masters were present to empower these Amulets including some of the most famous of all, like Luang Por Foo (Wat Bang Samak), Kroo Ba Krissana Intawano, Luang Por Poon (Wat Ban Paen), Luang Por Chan (Wat Bang Bor), and Pra Maha Surasak, of Wat Pradoo.

The second empowerment was performed in solo, on 5 January in the year 2557 by Pra Kroo Sangkaraks Prasit Sittigo the abbot of Wat Pleng, otherwise known as the temple of the pink Uposadha.

This edition of Amulets was made using traditional engine methods, and the metallic kinds of the edition, will possess the tell-tale signs of ancient Amulets making around the edges. This means that the ancient method was used and can result in irregularities around the edges of the coins.

This is not seen as a flaw, rather as a sign of authenticity and authenticity recognition. It is difficult to find these methods used in the modern era, and one can consider any addition of Amulets would use these methods to be an act of preservation, conserving the ancient methods and preserving the historical directory of Buddhist amulet making, which is now in, halfway through, its second millennium. As far as the sacred powder Amulets are concerned, these, are large in size, and intended to stand out from the crowd. They possess a very bombastic effect, attracting attention to the eye. This is of course, one of the magical properties of the god Brahma. Brahma’s 4 faces, attract customers are interested admirers, from all of the four cardinal directions. In Thailand, you will see that Brahma God as an image on his altar, placed in most places of business, and also places where many people are expected to gather. This is because the god Brahma will attract people to convert and congress in such places. This is very good for business success and for prosperity. The temple of the punk Uposadha, is already very famous with south-east Asians from Malaysia, Singapore, Hong Kong, and other countries. This is because they know the name of the temple, for the existence of a non-ordained Lay Master, who makes the traditional Thai Sak Yant Thai Temple Tattoos. This particular Ajarn is called Ajarn Tong, and is a Master of international fame. The temple itself however despite being in the shadow of the tattoo master as far as international fame is concerned, is actually a very important temple with a very vast linage of sorcery masters.