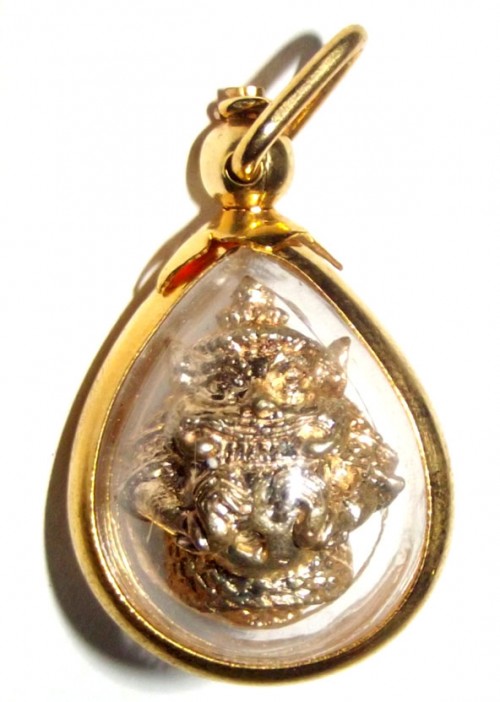 This Pra Rahu amulet of Wat Bang Khan is made from a silver-leaden alloy known as ‘galai ngern’, and is encased in a beautiful gold micron waterproof casing. The Pra Rahu amulets were released in the Serm Baramee Twee Choke Lap edition of Wat Bang Khan in 2556 BE. The edition included various Luang Phu Tuad amulets: two models of extremely high in pong Puttakun powder, a Pim Glad Mai Kheed in oblong shape, and a Pim Tao Reed Yai in clothes iron shape. Apart from the Pra Rahu and Luang Phu Tuad amulets, there were also issued some special Takrut Look Pern, which were made according to the dtamra of Pra Ajarn Nong of Wat Sai Khaw. The amulets from the Serm Baramee Twee Choke Lap edition received two complete Buddha Abhiseka empowerment sessions; one at Wat Bang Khan, and another one at Wat Palanupap. 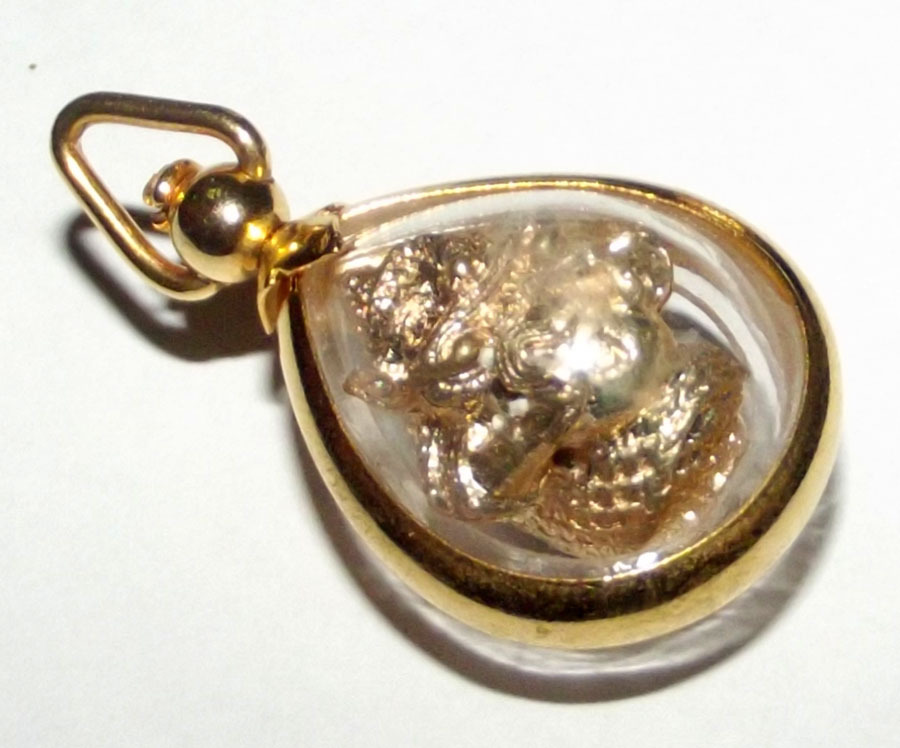 Thus, the Pra Rahu Galai Ngern amulet is blessed with strong powers of protection. Pra Rahu is the Lord of the Asuras, and as such he is a most powerful deity which offers his worshippers blessings of protection. With Pra Rahu’s help and support on one’s side, things can never go wrong. The person who, by means of performing proper bucha, proves his loyalty towards Pra Rahu, will be protected against black magic and dark sorcery. One will remain untouched by the asura demons and evil spirits, for they have to abide by the rules imposed by their Lord, which is none other than the mighty Pra Rahu. 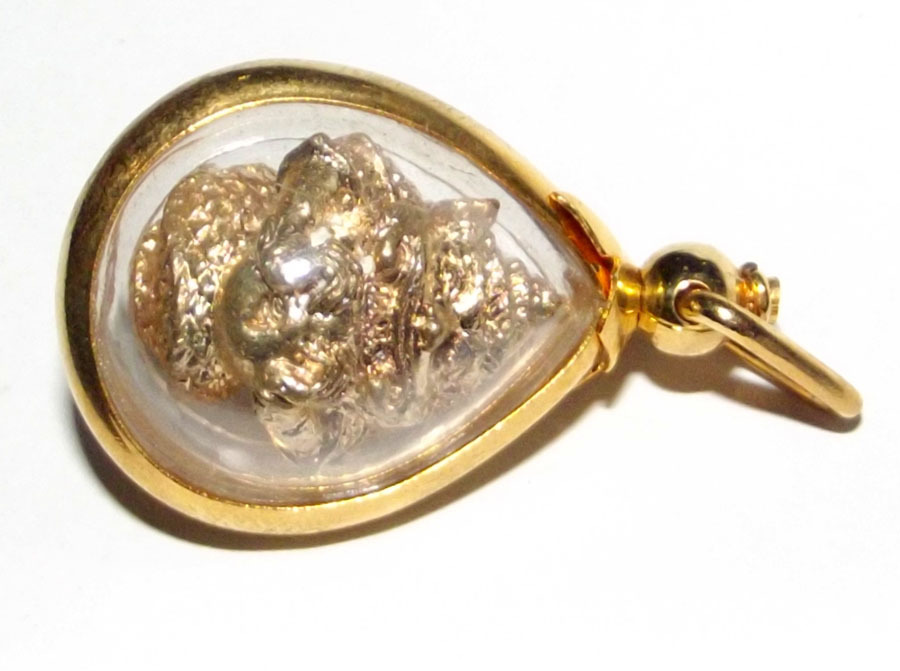 Hence, Pra Rahu has no remorse for tricks and treachery of backstabbers. Dishonest people will be dealt with quickly. And so, Pra Rahu can help to remove obstacles of bad luck, thereby significantly improving one’s fate. Likewise, any inauspicious astrological alignments will be immediately transformed into a positive outcome, which often results in good luck and good fortune. 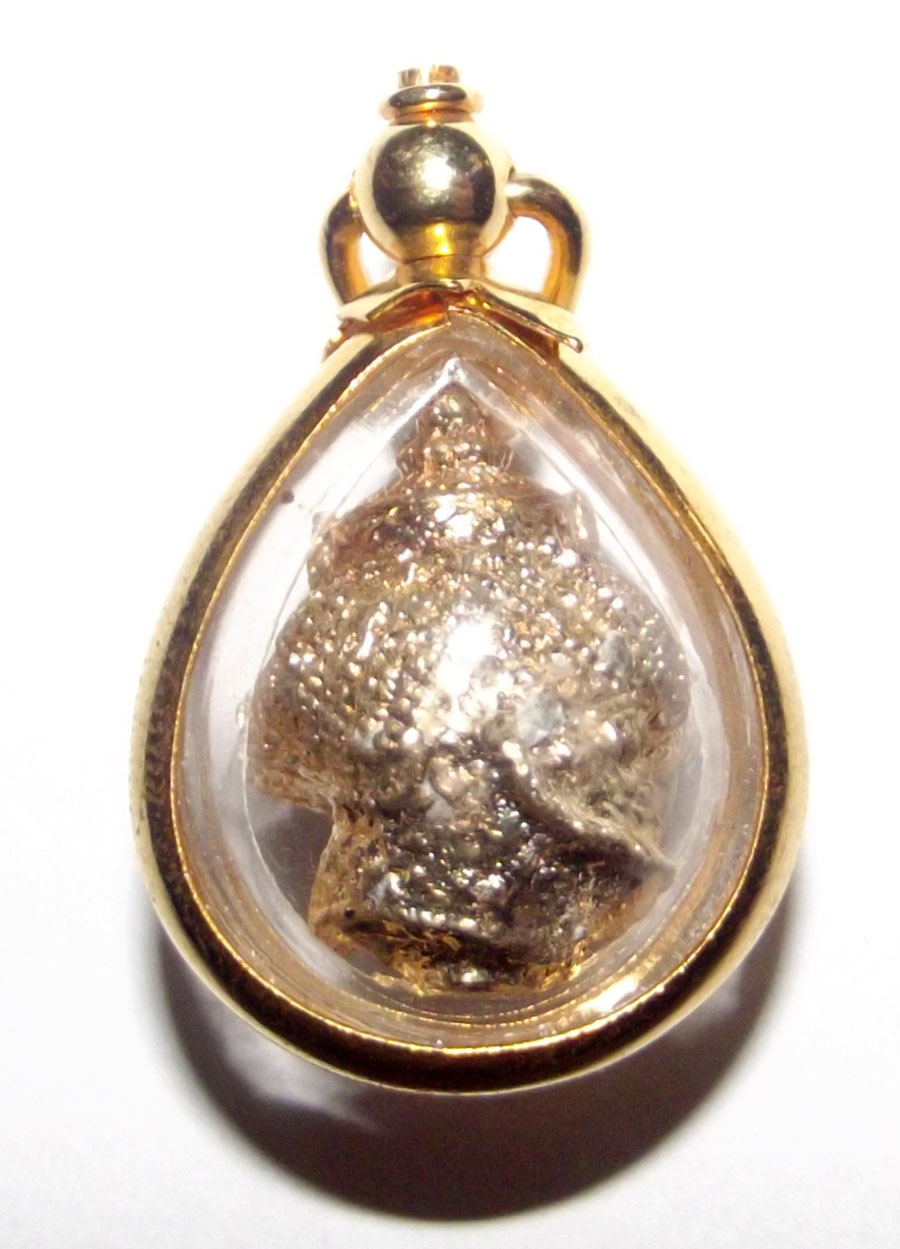 A classic Thai Buddhist amulet featuring Pra Rahu, the Ruler of the Asura Realm. The image of Pra Rahu is cast from an olden style silver-leaden alloy, which is considered a sacred metal mixture indeed. The sacred metal alloy is shaped into amulets that represent Pra Rahu swallowing the sun and moon. It is believed, that Rahu thereby causes the occasional eclipses. It is an act of revenge on Aditya (god of the sun) and Chandra (goddess of the moon) who betrayed Rahu when he took a sip of the elixir of immortality. Vishnu then decapitaded Rahu, leaving only his upperbody to become immortal. 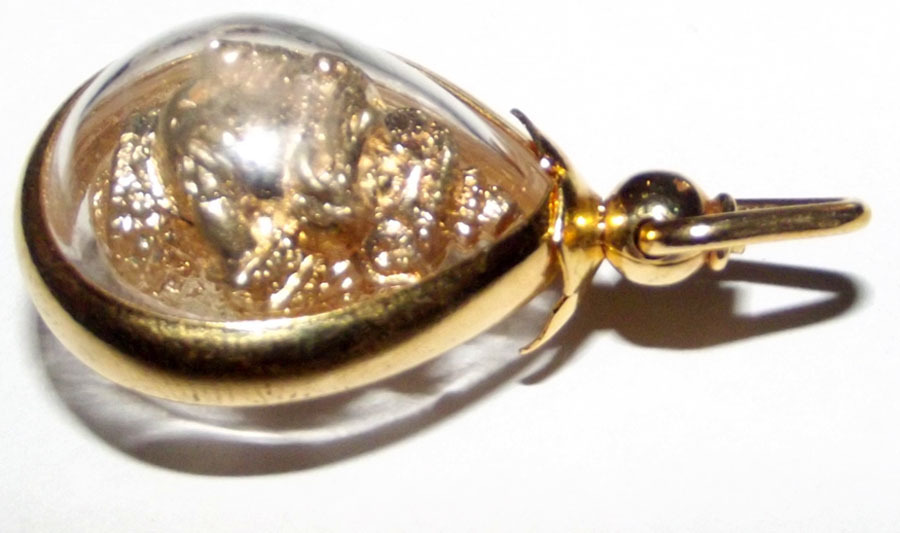 Twelve repetitons of the following kata are to be chanted: 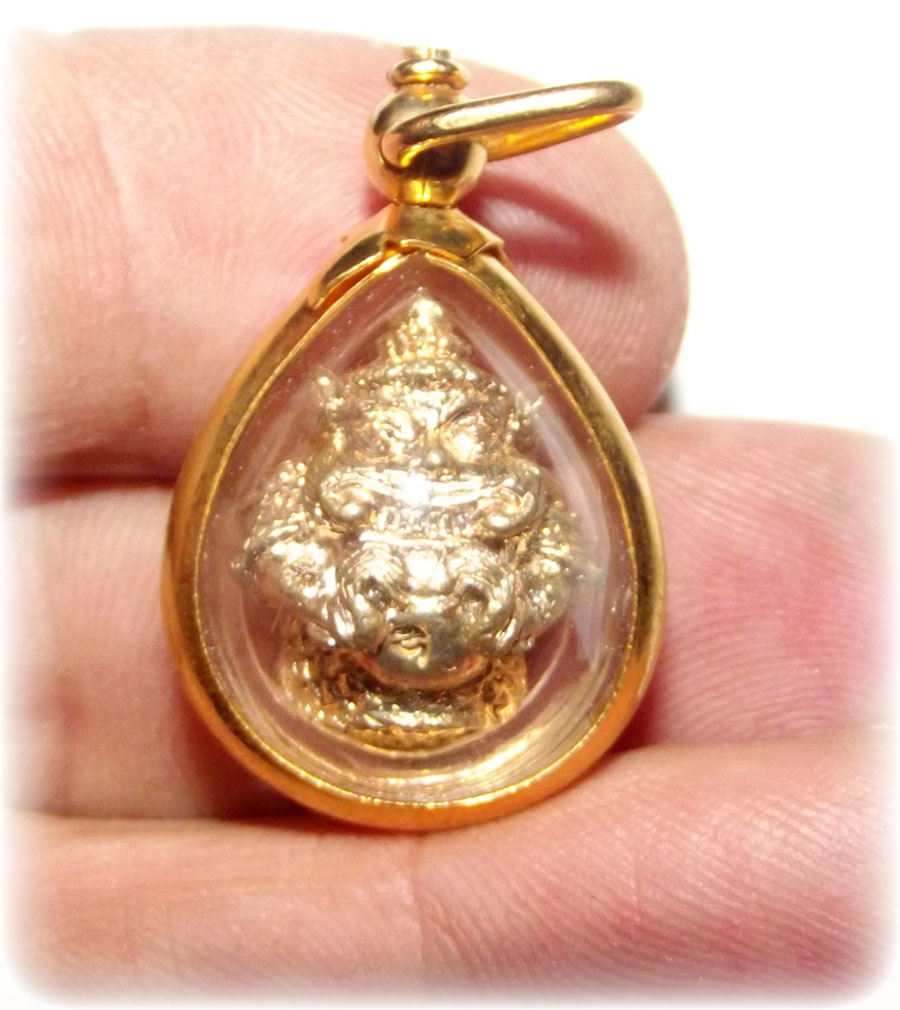 Kata Surya Buppaa (to be chanted in the daylight) 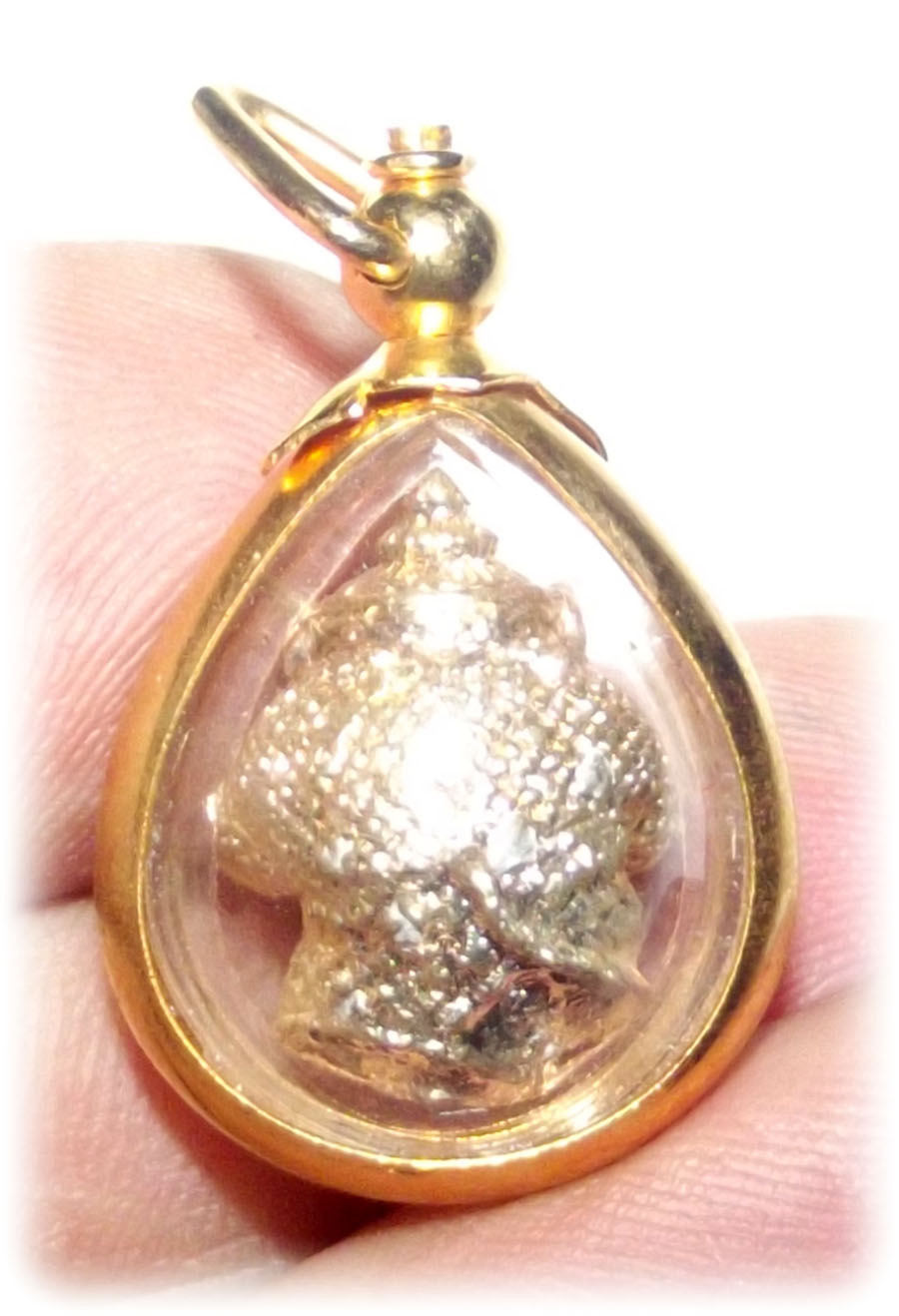 Kata Jantrabupbhaa (to be chanted in the night time)

How to worship Pra Rahu 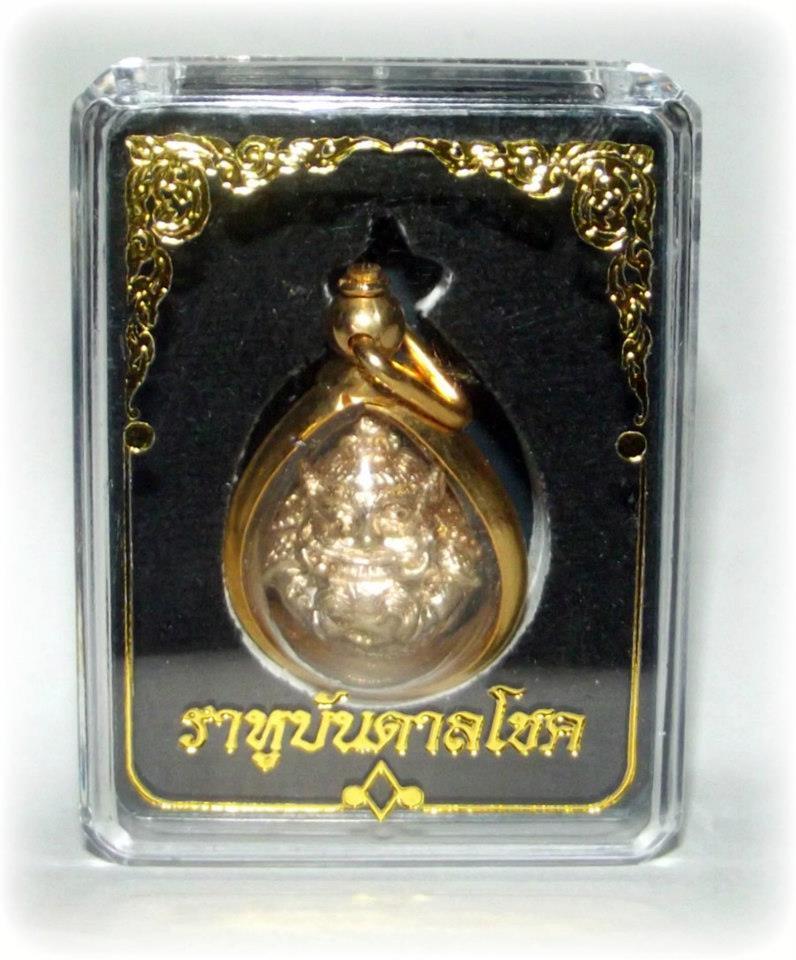 The amulet comes with the original box from the temple. 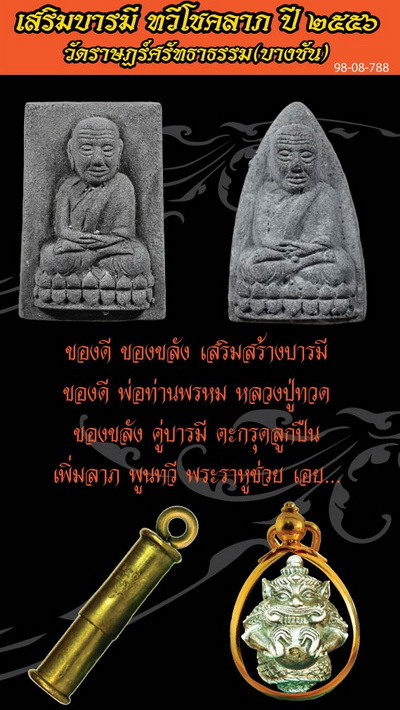